The History of Pepper Place

Sloss Real Estate began the return to Birmingham’s city center thirty years ago with the acquisition of the Dr Pepper Building. At the time, it was quite a leap to turn a development eye on the city center. In the late eighties, most developers were focused on expanding the suburbs.

The vision for the Dr Pepper Building at that time as it continues today was to create a creative urban community where local businesses, restaurants and shops could co-exist and support one another’s efforts. Today, Sloss Real Estate and its partners have assembled an array of buildings that stretch from roughly 28th to 31st Streets South between 2nd and 3rdAvenues South. This more than 350,000 square feet of redeveloped, revitalized and innovative property is home to some of Birmingham’s most local and most creative businesses that are generally broken down into four or five categories:

Pepper Place began gaining steam and becoming the place it is today when Sloss Real Estate was able to lure Richard Tubb Interiors here in 1989. His following and elegant Southern style became the catalyst for what would become Birmingham’s premier design and market district. Shortly after Richard’s arrival, others followed. Charlie Thigpen’s Garden Gallery came a decade ago. And, Design Supply in fall of 2017 brought more home resources and design accessories. The FarmStand by Stone Hollow Farmstead – a longtime Farmers’ Market vendor – brought local food and fare in the spring of 2019. And, the coming of Billy Reid with a lifestyle retail store that will integrate Southern food, art and music in the summer of 2019.

In parallel, the food scene at Pepper Place has blossomed into a full-blown culinary experience. Bettola offers award-winning Italian and the only true charcuterie in the city and the Red Cat Coffee House has become a hub of commerce for the area.

While these three early eateries found great success here, it was the coming of OvenBird that really lit the fuse on Pepper Place becoming the foodie destination it has. The restaurant won awards before it even opened and drew the national media to both Pepper Place the The Market. OvenBird’s space also signified a new architectural direction for Pepper Place with a highly customized dining space that seamlessly connected the indoors and out. Blueprint on 3rdfollowed in another innovative and architecturally cool space. Then, came The Lumbar with its garage door opening front to expand the bar into the sidewalk space and unique twist on Southwestern bar food. Hot and Hot Fish Club with join the list in the fall of 2019.

The Market at Pepper Place

The Market at Pepper Place was launched as a response to alarming trends Sloss Real Estate saw happening around the state. Alabama has forever been an agrarian state with excellent farmers, but with sprawl eating up land and the development of what seemed like a grocery chain on every new suburban corner, state farmers had fewer and fewer places to sell their goods.

It was really that simple – create a place in the state’s largest city where Alabama goods could be sold and celebrated. Now in its 20thseason, what began with a few tents in a parking lot has turning into one of the most visited weekly attractions in the city. It’s grown to encompass almost two city blocks and is frequented by a diverse population of locals and visitors alike. The Market has been featured in most media outlets that count and has brought great visibility to Pepper Place.

However, as visible as The Market is and how successful it has been, it couldn’t exist without Pepper Place. The Market at Pepper Place is a physical real-world manifestation of the vision Sloss Real Estate set forth by developing Pepper Place in 1988 – develop a creative community that celebrates local, unique and innovative business as only Birmingham can. Plus, many of the Pepper Place shops and restaurants participate in The Market each Saturday. Pepper Place chefs do demos for attendees beginning in May each year, Ignite Cycle has outdoor sessions, the retail shops open their doors and find new products to carry and OvenBird even serves mimosas in its courtyard that can now be carried throughout Pepper Place as the area was designated as Birmingham’s newest Entertainment District back in February.

“The Market” is the weekly event that all can see, attend and enjoy. “The Place” is an everyday experience for the businesses that call Pepper Place home and with the continued addition of special businesses, restaurants and shops it is increasingly becoming an everyday destination for all who want to experience the best Birmingham has to offer.

So, Pepper Place and The Market at Pepper Place are inextricably linked. Both are focused on supporting and growing local business and curating a creative community. Both were established for much the same reason – to bring people back to the city center and provide them a place to sell, make, cook, dream – do whatever it is that they do. And, while each has its own identity, each supports and enhances the other. For example, many tenants of the offices at Pepper Place first learned of “the place” through their visits to the Market. And, many businesses that have first tried their concept at the market have sought space or launched their brick and mortar business at Pepper Place. 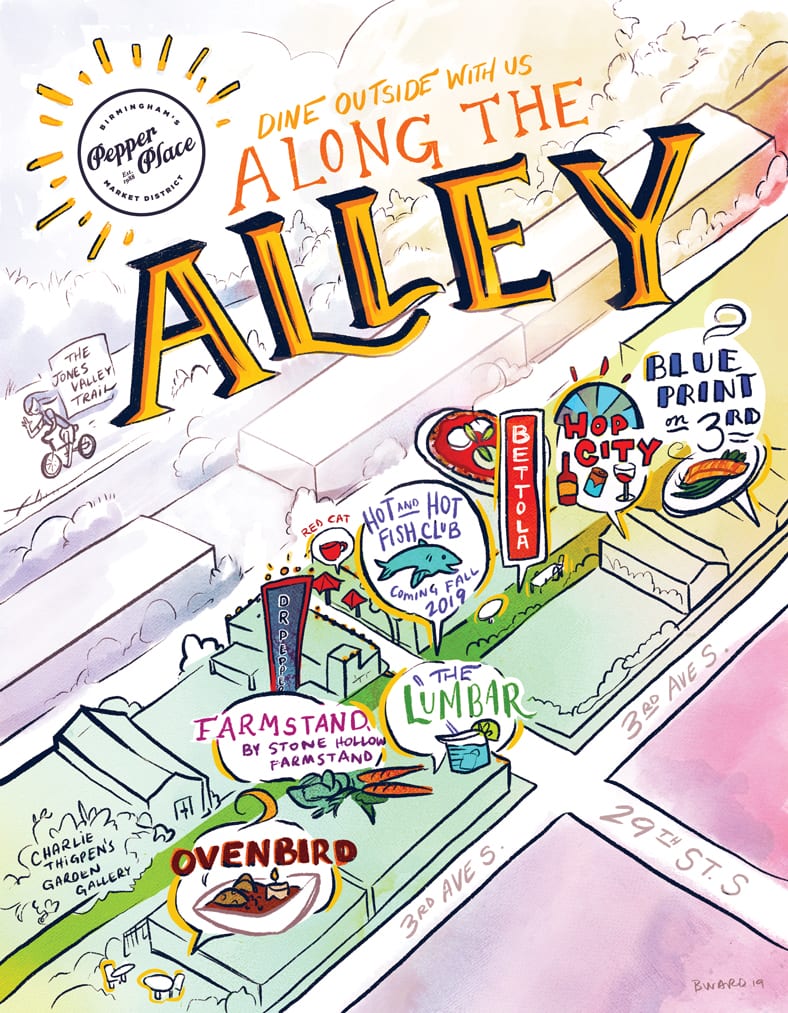